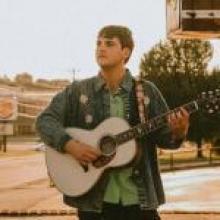 Matthew Whitaker is a singer/songwriter from Knoxville, TN. His original music is driven by tasteful melodies and colorful chord voicings inspired by artists such as The Beatles, Frank Sinatra, Stevie Wonder, The Shins, Unknown Mortal Orchestra, and Bon Iver.

Matthew moved to Cookeville, TN in 2014 to pursue a Bachelor of Science in Chemical Engineering. Since then he has become a first-call entertainer in the Middle Tennessee/Upper Cumberland area.

Known for easy-going professionalism and an out-of-the-box take on songwriting, Matthew is building a following of devoted fans who can’t wait for their next encounter with his smooth vocalization and unexpected harmonic changes.

In the process of producing his first recordings at Parlour Studios in Nashville, Tennessee, Matthew plans to release his first single later this year.