Newbird on the Water - Singer/Songwriter Showcase 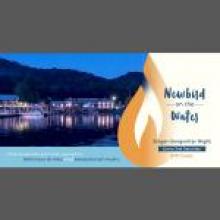 Every second Saturday of the month through the summer, Wildwood hosts a phenomenal evening of songs and stories with the writers who made them famous.   It’s like being at the Bluebird in Nashville, but sitting by the lakeshore with stars above you and a bonfire nearby.  We call it NEWBIRD ON THE WATER!   Learn More

Who: Marty Dodson and Clay Mills

I was born in Apple Valley, California. My family moved around for several years before settling in Nashville, Tennessee when I was 5 years old. I have always loved music, but was intimidated by the sheer number of people I encountered growing up that were NOT succeeding in the music business. So, I went to college, got a degree in Psychology and worked in another career for 10 years. At that point, I decided I had to try to chase my dream of being a professional songwriter.

It took several years of writing for free before I landed my first publishing deal with Kim Williams and Sony ATV in Nashville.  Several years after that, Rascal Flatts recorded “While You Loved Me” and I had my first top ten single.  Another three years went by before Billy Currington, Jason Matthews and I had our first #1 single with “Must Be Doin’ Somethin’ Right”.

People often ask me what my favorite song is that I have written.  I’m very proud of the six #1 singles.  I’m thrilled that several iconic artists have recorded my songs – Joe Cocker, Leon Russell, The Oak Ridge Boys – to name a few.  I’m proud of my song “Bounce” knocking Psy out of the #1 spot on the K-Pop chart in Korea and for winning Asian Song of The Year this year.  And I’m proud of my Plain White T’s and Saving Jane cuts because they are off the beaten path for a Nashville writer.  But my FAVORITE songs have yet to be recorded.  Ask me sometime and I’ll play some of them for you.

It has been a long, hard journey with considerable costs. But, in the end, it has been worth it. I wake up every day and get to do something I love. You can’t put a price on that.

Clay Mills
Clay Mills, a 16-time ASCAP award-winning songwriter and producer, grew up surrounded by music in the Blues-rich Mississippi Delta. Over the course of his songwriting career, Mills has penned Number 1 hits for Darius Rucker, “Don’t Think I Don’t Think About It,” Diamond Rio, “Beautiful Mess,” and Kimberley Locke, “Fall,” while collecting Grammy nominations for “Beautiful Mess” and Trisha Yearwood’s “Heaven, Heartache, and the Power of Love.”

Clay began playing at clubs in Rock and Country bands by age 13. When he was 19, he moved to the New York City where he wrote, programmed tracks, created beats for rap and hip hop artists, and sang on major TV commercials; including Red Lobster and the Armed Forces. In the late 90’s, Clay started co-writing with a New York actor who was an aspiring Country artist, Ken Meeker. Ken introduced Clay to Nashville producer Mark Bright, who flew to New York to watch him perform for a crowd of 500 people. Impressed, Mark signed Clay to a publishing deal with EMI Music. Since moving to Nashville, Clay has had over 75 major artist cuts, three Number 1 hits, six Top 5 singles, and 12 Top 40 singles. His love of all types of music shows in the diverse list of artists who sing his songs: Babyface, Lady Antebellum, Easton Corbin, Reba, Bill Gaither, Lone Star, Darius Rucker, Trisha Yearwood, Clay Walker, Kimberly Locke, and Joe Nichols. Clay’s latest string of singles, co-written with Country superstar and groundbreaker Darius Rucker, include the song that introduced Darius to the world of Country music: “Don’t Think I Don’t Think About It.” More hit singles, “History in the Making” and “I Got Nothin’,” soon followed.

Mills believes strongly in songwriters and their value to world. He has served on the NSAI board and lobbied Congress on behalf of creators and copyrights. In 2012, Clay co-founded SongTown, a 6,000 plus group of aspiring songwriters. He is personally involved in helping members advance their craft and make connections in the music industry.

When Clay is not writing songs, you might find him riding horses on the Wyoming plains searching for inspiration for his next song. “The great thing about the West is that there are still huge pockets of land that look like they did hundreds of years ago…bristling with wildlife and the elements. It helps me find that healthy balance between life, love, and the music business.”

For more information and for a list of upcoming concerts visit: https://wildwoodresorttn.com/newbird-on-the-water/